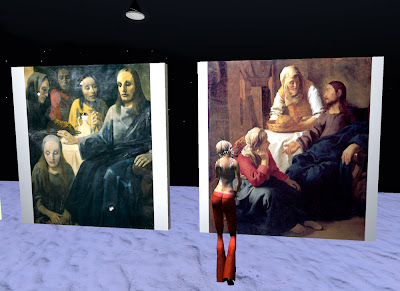 So the first period of van Meegeren the forger is as a producer of pastiche. He knows the elements of a corpus and puts them together. In his second period, he makes things of a new style, one that is totally unlike Vermeer. Except for one thing. It's art.
Bad art, but art.
Huh?
kk here we go.
The painting at the right here is the only Vermeer religious genre that we have. There may have been others. The painting at the left is a similarly seated version by van Meegeren, but it is not a Vermeer, or even a cartoon of one. The problem with the "Valley of Uncanny" explanation, as clever and witty as it is, is that this painting can't pass for something which is even a sketch of a Vermeer. It is wrong in a dozen ways, and it is linked to a larger 20th century string of aesthetic ideas. It's also genuine, and not a fake. Not in the sense that it is what it was said to be, but it is a painting.
Look at the painting on the left. Where is the artist's eye focused? That's right, on the penitent pleading with Jesus. Look at her face, it is detailed. If you stare at it, even in this picture, the rest of the painting becomes 3D. Jesus and Mary washing his feet foreground nicely, the bread and the woman bringing it are in peripheral vision, and the figure in the background looking down? drops to the correct background.
In van Meegeren's mind, without a doubt, is a virtual world: he can place figures in it, move objects, and not only are physical external details in the correct place, despite the anti-realist aesthetic of the painting, but the artist's vision field is there. This is not a pastiche, it is a painting. It is one of the wrong aesthetic, and one of an inferior artist to Vermeer in a host of ways, it is laboriously mannered, and even takes some traits of mannerism and other earlier styles. Compare the faces with this one by Jan van Eyck.
This is where the differences between object and reception stand out. In the last century, there has been extensive argument about object and reception. The extreme view on one side is that there is no object separate from it's reception. Stories like van Meegeren help prove this in the minds of it's believers. There is no truth, only the stories we tell about it. On the other side is the view that there is real reality real real, repeat that a few more times: real real real, that we can put in our brains and have like a pencil. Most people are clear that these positions are the kind of thing that aren't really true. (uh hu, intentional)
The case of the first van Meegeren we looked at was that it was not a copy, in that there was no original. It was a pastiche, in that it was not an original in itself. van Meegeren had no command over his parts, and where he did not know what to put, because he couldn't include all copies of bits of originals, he failed. Music in the wrong place, bowl of fruit that was wrong, wrong tablecloth. The lack of unity is seen in the lack of the artist's field of vision. The first van Meegeren was a fake.
The second painting, while obviously in an inferior aesthetic, is not a fake. It is a genuine painting. There are no pastiched elements that have not transmuted to the visual language of the painting. The artist's field of vision is present. It is attributed, however, to Vermeer. And while money is part of why, it is also not the whole of the explanation.
To see how this works, let's take a copy, that is not a copy. 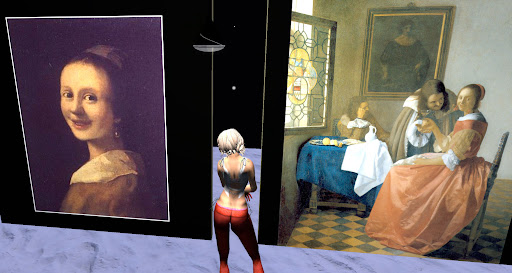 The first painting to look at is the original (link to the essential Vermeer page) and then to a painting that is in the American National Portrait Gallery. The copy has aesthetic problems. Vermeer's famous earring, but on a peasant girl, not a house servant that might be legitimately wooed by a gift. But the more fundamental problem is that she is out of focus, and in a portrait, that looks wrong. It should. On the right is the original. The face is blurry because even though the girl looks to the painter for approval to have the wine as the young man leers at her, the painter is not meeting her gaze. The detailed area is around the cuff, the cloth, the vase the top of her dress. The power of the story here is quite sharp. The girl is asking for permission to enter the world of adult sexuality, and the onlooker cannot really bear to watch.
Stripped from context, the copy is no longer a copy, because elements of the original that made the face make sense, are gone.
I want to go back then, to the late period. In contrast, the pieces are not ripped from anywhere else. We are not seeing "collections of Vermeer quotes" as one art critic put it, but a whole visual language. The reality of this language goes far beyond volk-kitsch Nazi theorizing of art, it goes to the language of it's time, and to a broader language, which is the language it's purpose itself. Paintings, all objects, speak to their time, but they also speak to their purpose, which recurs from time to time, and too which we look for meaning and pasts to connect to.
The painting here is not a copy, not a forgery, it is a new style of art, on top of which is placed Vermeer's name. It is intended to erase Vermeer and replace him with van Meegeren, and thus allow van Meegeren to do what he can't do with pastiche: actually paint. van Meegeren cannot assemble quotes into a usable whole. It isn't about closeness to Vermeer, and a valley of uncanny, but that van Meegeren cannot paint in quotes. He can paint in this other style. The ersatz Vermeers are not "close but wrong," they are just wrong. No one can honestly believe they are by a great artist, once you have seen what a great artist looks like, let alone a particular great artist, because they lack the unified language that their surface suggests they should have.
By trying to copy and pastiche, and produce forgeries, he managed to not produce actual paintings. That van Meegeren was a careful forger can be seen from his way of doing forgery, and this to reflects an aesthetic series of choices. van Meegeren came to understand that if he wanted to make paintings that would be taken as Vermeers, he had to produce paintings. It was not a matter of close to Vermeer inviting close scrutiny, it is that van Meegeren the pastiche could not withstand that scrutiny.
Posted by Lillie Yifu at 6/04/2009 12:01:00 PM